• Said in front: I have been far away from neuroscience study since 2018, I’ve already forgotten all the naming rules and abbreviations of even the most common hormone. I can’t guarantee that I am writing with rigour. So I hope you just read this passage as a tale.

I recalled this rare syndrome a few days ago when I read a post on ZhiHu, where people share the stories they just made up. The poster tells:

This is hard to imagine for people who always say “seeing is believing”. But the fact is that our Sensory is not as reliable as we thought, especially vision. I believe you always find images like this: 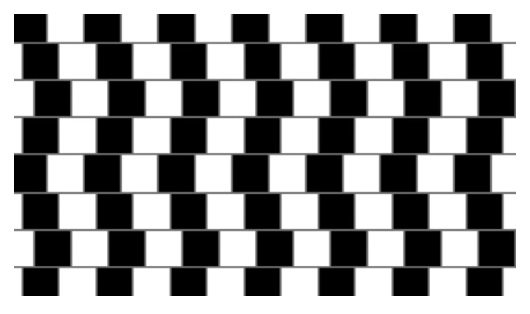 At first you were shocked, but later you might accepted that “It’s not a big deal, just some trick that cheated my eye, or my eye cheated my brain. It’s not too weird to understand.” People can understand why and how we wrongly judge the straight line as curve because of the confusing background. But, when something like the poster said tells us that our whole vision could be generated by brain but not saw by eye, people can’t simulate or imagine such weird thing like that.
I myself trusted the poster completely, for I was already shocked by another example three years ago. Here’s a Fragment on “The Astonishing Hypothesis” by Francis Crick.

“There is one kind of visual defect that is so surprising that people have been known to doubt that it could possibly exist. This is known as Anton’s syndrome or “blindness denial” The patient is clearly unable to see but is unaware of that fact. Asked to describe the doctor’s tie the patient may say that it is a blue tie with red spots when in fact the doctor is not wearing a tie at all. When pressed the patient may volunteer the information that the light in the room seems a little dim.”

I have often found that when talking to someone over the telephone whom I have not met I spontaneously form a crude visual image of his or her appearance. I held several long telephone conversations with one man whom I must have pictured in his fifties, rather thin, with rimless glasses. When, eventually, he came to see me I found he was in his thirties and was decidedly fat. It was only my surprise at his appearance that made me realize that I had previously imagined him otherwise suspect that a person suffering from blindness denial produces such images, probably because the brain damage is such that these images do not have to compete with the normal visual input from the eyes.

Recently we are obsessed with something called virtual reality, it might be the ultimate way for human being to interact with computer. We’ve been dreaming about it since last century, we pictured in the movie that human brains are linked by wires with computers, and through the wire our conscious become omnipotent in a giant computer. But look at what we’ve done today, we just wear monitors on head and hold handles which detect our movement, and we proudly call it “Virtual Reality”.

So, since we randomly found that some brain damage causes us to believe in what we are visualizing in brain, could it be controlled? Then, with some drug to block specific neurons, we can dive into the world completely made up by our own brain, like the movie Inception.